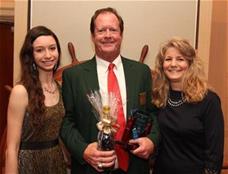 Ed Armstrong, a Shareholder and Co-Chair of Hill Ward Henderson’s Land Use Group for Pinellas County, was named “Mr. Clearwater” by the City’s Chamber of Commerce at the Chamber’s 92nd Annual Meeting held on February 3, 2014 at the Sheraton Sand Key.

“Mr. Clearwater” is the highest honor given by the Clearwater Regional Chamber of Commerce. Since 1958 the Chamber has bestowed the Mr. / Mrs. Clearwater award annually to recognize a person’s exceptional community service, leadership and volunteerism. Mr. Armstrong was chosen primarily for ­­­­­­­­­­­­­­helping ensure that local hospital patients are cared for and that Pinellas County’s public office officials are well-advised and prepared. Mr. Armstrong added, “Clearwater is a great community that I am proud to be a part of and call home. I am honored and humbled that the City has chosen me as a recipient of this recognition.”

Prior to joining Hill Ward Henderson, Mr. Armstrong served 27 years as a Shareholder at the largest law firm in Clearwater. With three decades of experience, he has obtained approval for many of the most complex development projects in Pinellas County. He regularly represents national and local developers, public and private, with interests in the Tampa Bay area. In addition, Armstrong currently serves on the Board of Trustees of the BayCare Healthcare System, and is the Immediate Past Chair of the Morton Plant Mease Healthcare System.